We use the Task Sub Processes to create them, doing so we will simplify the logic behind the main process.

In the example below we will draw 2 Sub Processes: 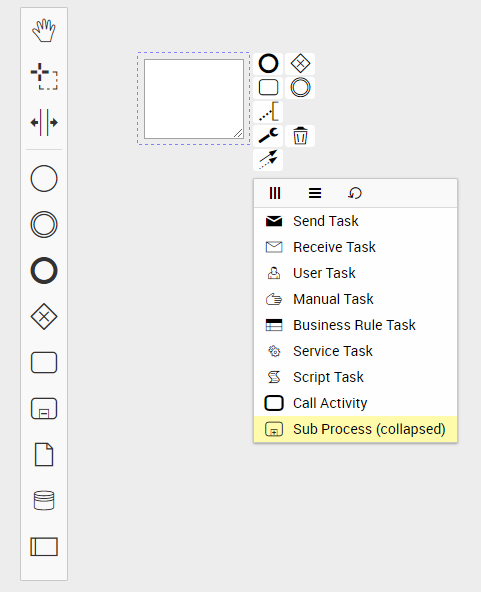 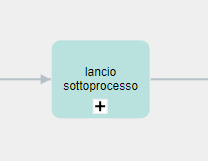 Below you can display the configured process.

The process is activated once a new Potential is created and follows the flow in order to reassign it or to change its status.
To activate it we tick “Active” once the chart and the configuration are ended.

On the left the first task, ore better the initial condition, has been created. Therefore we select the entity, “Potentials”, and we choose when to run the check “on creation”.
Then we state a Group of condition to start the process, in this case the Sales Stage has to be among the ones reported below (“Prospecting”, “Qualification”, “Budgeting”). 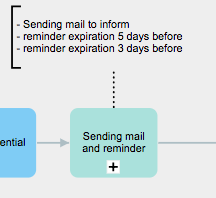 This task represents the link to a sub process, which follows its own flow. For this reason we need to chose the sub process to link. In the process selected there is contained an email sending task to inform about the creation of the potential and the creation of two reminders, one 5 days before the expiry date, and the other 2 days before.

This task represents a check on the potential’s status (Sales Stage). Here we define the statuses that have to be managed.

They are divided in two blocks:

The setting is displayed in the following page. 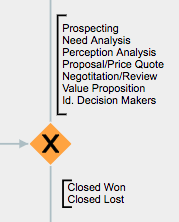 This task is an Exclusive Gateway, which defines the different flows according to the conditions previously set. In this case, if the Sales Status is among the ones reported earlier in the first block (Prospecting, Decision Makers, Negotiation/ Review etc) the process goes on with the task called “Change assignee request”. On the contrary if the status is one of the second block, Close WON/LOST, we go on with the Task “Send Summary Email”.

This task uses the “ProcessHelper” that talks with the user asking a manual intervention. We flag the box “Show pop up in the linked entity” to make a window appear (dynamic form) containing a set of data in read only mode as a recap and a user field in which a new assignee can be selected and a Button field in with which is possible to change the picklist value “Confirm”.

It is necessary to confirm to proceed. 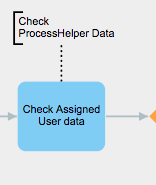 This Task checks the data of the Process Helper. As said, though a dynamic form some recap fields and a confirmation pick list are shown (YES/NO), this defines the new reassignment.

In this point we use the Exclusive Gateway to decide which way the process has to take according to the answer given
in the Dynamic Form. If the user confirmed (YES) the process goes on by reassigning the Potential, if not (NO) the process checks its sales status (Sales Stage).

This task is the email sending that informs the new Assignee of the Potential. The user will receive an email containing a summary of the Opportunity.
In the email the process fills the mandatory field, that is to say: Sender, Receiver, Subject and Body.

The task here pictured represents a second check on the Potential status (Sales Stage).
We define the possible status that have to be managed. In this case we check if the sales stage is equal to “Proposal
Price/Quote” or not.
If the result is a match we go on by recalling the subprocess “Pre filled Quote”, otherwise we go directly to the task
“Send summary Email”. 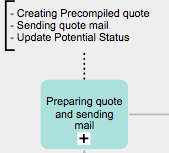 The task on the left represents a link to a sub process, which will create a quote and when its stage is changed in “Negotiation/Review”, will send an email and update the sales stage of the Potential. 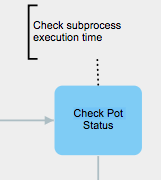 We go in with a task that runs a check and the sales stage of the opportunity, to verify the complete execution of
the Sub Process. If it is equal to “Negotiation/Review”, the flow goes on with the next Task, the sending of an email
containing the final recap.

This task represents the last action, a summary email to inform the assigned user about Potential data.
Click on "New action" - Send email and then insert all needed fields.
After that, the process will be ended (End event).

As said, the process ends with an End Event, to which is linked the “Potential” and the status is set on “Ended”.

The Task represented is the initial one to launch the Sub Process. No entity is selected and on “When to run the check” we select “When executed subprocess”.

In this Task the email sending to the assignee of the Potential is configured. We chose New Action – Send Email.
We enter the main information (sender, receiver, subject, body..)

On the left we can see a task used to create a reminder, that is a calendar event close to the expected expiry date.
The event is planned 5 days before the “Expred Close Date” reported in the Potential.

In this Task we see the creation of a second reminder event. This, unlike the first one, is planned tree days before the expected close date reported in the Potential.
Therefore we fill the various fields as indicated and we subtract 3 days from the indicated date.

As seen in the previous Sub Process, we find the start Task to begin the process. In fact we don’t select an entity and on “When to run the check” we select “When executed subprocess”.

In this Task we configure a New Action – Create Entity, then we select the “Quote” module to create a pre filled one.
We place the title of the action and the various fields, we also link the Potential and we set the expiry date in 30 days.

At this point the Sub Process blocks the execution flow on the Task described below.
We wait until the Sales Status of the Quote related to the entity previously created is changed in “Negotiation/Review”.
Only when this condition is true the process will proceed.

Once the quote’s status is changed in “Negotiation/Review” the process goes on and sends the details to the related entity (Account or Contact) with the assignee in copy. 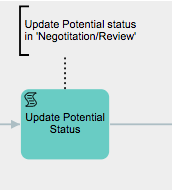 Now we update the Sales Stage of the Opportunity in “Negotiation/Review”.

At this point the Sub Process ends.

Export
Back to top